Polish Power does it again!

On Saturday 14th September Swindon Barbell member David Wozniak (Wozza to his clubmates) took to the WDFPF platform to compete in the European Bench Press Championships.

Competing both equipped and unequipped in the Masters 1 category he had been training hard to ensure that his Bench Press was as strong as possible for this huge competition. With a focus on simple training, focusing on back and tricep work he was aiming for great control and a strong lock out on the day.

And that’s exactly what he got.

First he lifted unequipped, with and impressive 160kg to open the day. With the first lift in the bag he ramped up the weights, pressing 167.5kg for his second attempt and an enormous 175kg for his final lift. This was not only a competition personal best, but it was enough to secure him first place in his class and second overall!

Then it was on to the Equipped Bench Press, where his numbers only got bigger and better.

Opening at a clean 205kg and feeling strong he pushed hard for 210kg in the second lift and rounded out the day with an impressive 217.5kg, another 2.5kg competition personal best, and enough to secure him yet another first place!

Swindon Barbell are so pleased for Wozza, and cannot wait to see what he pulls out of the bag at his next competition! 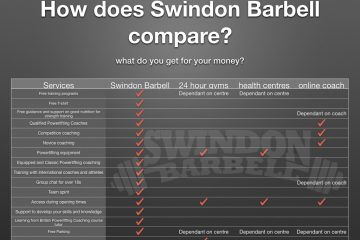 What do you get for your money?

Welcome to our News Page

Here you will find the latest news and information from Swindon Barbell including: results from SBB members at competitions Competitions held by SBB coming soon International news and results Schools and local club developments from Read more…