January 21 sees some of Britain’s finest Powerlifters competing at the British Open championships in Horncastle, Lincolnshire.

Amongst the lineup we have 6 of Swindon Barbell’s best Equipped lifters in attendance as well as a strong team of coaches, managers and supporters

Click on their names to jump straight to their profile.

You can find links to live stream, line up and more about powerlifting below:

In honour of the fact that in just over a week I'll be competing at the British Equipped Championships alongside some of the strongest people in the world, here's a lil #flashbackfriday to February when my bench was 25kgx5 and my deadlift was 55kgx5. I am so bloody proud of how much stronger I've gotten since my first college powerlifting session a year ago under the guidance of @you_cubed_fitness @charliesgale and @scandalwitch having never lifted before and how 6 months of consistent strength training has helped me progress 😊 all down to the amazing people of @swindon_barbell_club and their constant support and encouragement ❤ #powerlifting #sheikobitch #jackedswoleandoutofcontrol #trexarms #stillgotaslowsquatsetuptho

Emily began powerlifting with one of Swindon Barbell’s grass roots club, New College Powerlifting Club only 12 months ago in Jan 2017.

Since then she has competed in raw competitions but excelled so much she has qualified for both raw (classic powerlifting, without any equipment) and this weekend’s equipped open championships.

She has some very stiff opposition in the Junior class this year but has been working hard in the gym and is ready to try her best and smash out some personal best’s.

This will be Christie’s third British open championships and is fighting to retain her title as Britain’s strongest 72k woman but, like Emily, she will face some serious competition.

She has just returned from the IPF World Open championships where she his some amazing personal best’s and, judging by this training video, this weekend is set to be the same.

Charlie is going in to this weekend’s national championships aiming to secure her 10th British title, a phenomenal achievement from this old hand.

She also has her sights set on breaking the all-time British Powerlifting total record, currently held by Mertle Augee which is 587.5k. Charlie’s current competition best is 572.5k, although her individual bests (in the squat, bench and deadlift) do amount to more than this so if Charlie can pull it all together on the day we could be in for an exciting competition.

If Charlie can beat her best squat, seen here, of 227.5k she’ll be on for a good start to hit that record.

#tbt to the best squat of my life. #ipfworldopens2016 where I hit this 227.5k/ 500lbs and took the British Squat Record. I hope I can beat this in 3 weeks at the @gbpowerfed #britishopens2018. #powerlifting #equippedpowerlifting #squat #kneeewraps @titanpower81 @theipf @gllsportfoundation

Matt has also returned recently from the IPF World opens, however, has been battling a long term shoulder injury. This has not deterred him from training hard when he can and following smart recovery protocols when he has to!

Matt, as with all the lifters, is facing a big battle with many of the -93k men including Milton Keyenes Andy Champ.

Akin, who’s wife gave birth to their first child in 2017, has been working hard to balance a new family life, work and training.

However, he’s thrown himself in to the new equipment from Titan Support Systems and is looking to put in some crazy numbers from this relatively novice powerlifter.

However, he is up against unreal opposition in the likes of current GB team members Jake O’Neil and former IPF World Open Champion Dean Bowring.

The Sunday will see Britain’s best Bench presses battle it out to claim Gold and our very own Polish Power will be in the line up.

Wozza has been making incredible improvements using his bench shirt and is really excited to get on the platform and smash out personal best’s, aiming for those medals!

If you want to know more about the competition or about powerlifting see the links at the top of this page or email us at lifter@swindonbarbell.com 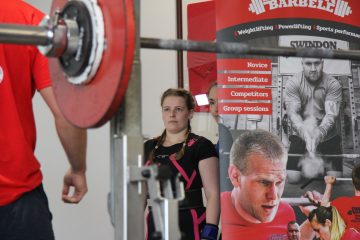 Swindon Barbell hosted the inaugural Wiltshire and Gloucestershire championships on the 21st July. The event was opened by Mayor Michael Farrow and Cllr Allison Bucknell, who both spoke about the work Swindon Barbell has been Read more…